Life According to Sam 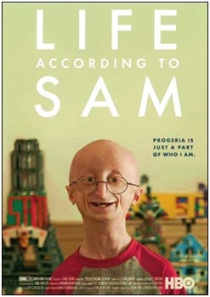 Next Monday, October 21 at 9:00 pm EST, HBO will debut LIFE ACCORDING TO SAM, the story of Sam Berns, a young boy with an extremely rare and highly-rapid aging disease called Progeria, and his family’s 13-year fight to find a cure.

This film tells a story not only about the love of physician parents trying to save their son ’ it also portrays a winding journey throughout the scientific process and the pivotal role that medical innovation plays in our lives. In the film we see children with Progeria gather in Boston from around the world ’ all expected to live no longer than 13 years ’ to receive treatment and participate in a first-of-its-kind clinical trial.

The film’s Oscar®-winning Directors Sean Fine and Andrea Nix Fine have earned multiple awards for LIFE ACCORDING TO SAM, winning the ’Best of Fest’ at the AFI Docs Festival in Washington, DC; the Audience Award at the Nantucket and Martha’s Vineyard Film Festivals the Best Storytelling Award at Nantucket and Best Feature Documentary at the Woods Hole and Rhode Island International Film Festivals.

The Progeria Research Foundation, a Research!America member, is leading the fight to find better treatments ’ and ultimately the cure ’ for Progeria, the rare and fatal “rapid aging” disease affecting children around the world.

If concerted, long-term investments in research are not made, America will lose an entire generation of young scientists.
Brenda Canine, PhD; McLaughlin Research Institute, Montana