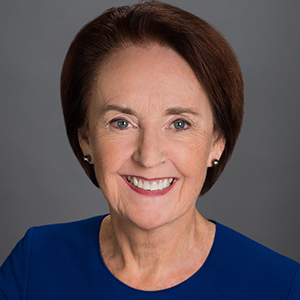 Mary Woolley is the president of Research!America, an alliance that advocates for science, discovery, and innovation to achieve better health for all. Under her leadership, Research!America has earned the attention and respect of elected and appointed officials, researchers in the public, private and academic sectors, media, and community leaders with its record of innovation in advocacy for research. Research!America’s reports and publications, Web sites, and constituent education initiatives have been honored by leading regional and international communications and advocacy organizations.

Woolley is an elected member of the National Academy of Medicine (formerly the Institute of Medicine) and served two terms on its Governing Council. She is a recipient of the Adam Yarmolinsky Medal for distinguished contributions to the mission of the Academy over a significant period. Woolley has served two terms on the National Academy of Sciences Board on Life Sciences, and currently serves on its Board for Higher Education and Workforce.  She is a Fellow of the American Association for the Advancement of Science. She is a founding member of the Board of Associates of the Whitehead Institute for Biomedical Research.  She is co-chair of the Science and Technology Action Committee. She has served as president of the Association of Independent Research Institutes (AIRI), on a number of academic boards and advisory councils, as a reviewer for the National Institutes of Health and National Science Foundation, and as a consultant to several research organizations.

She has a 30-year editorial and publication history on science advocacy and research related topics. Her op-eds and letters to the editor are published in newspapers and magazines from coast to coast including The New York Times and Washington Post. She has been published in Science, Nature, Issues in Science and Technology, The New England Journal of Medicine, The Journal of the American Medical Association, The Scientist, Women’s Health Magazine and others. She is a sought-after speaker and is frequently interviewed by science, news and policy journalists and has received recognition by PBS as an “Unsung Heroine.”

Woolley holds two honorary doctoral degrees, from the Northeast Ohio Medical University (NEOMED) and Wayne State University. For her work on behalf of medical research, she has been honored as a Woman of Vision by the American Committee for the Weizmann Institute of Science and has received the American Hospital Association Silver Touchstone Award for Public Affairs Programming, the Columbia University College of Physicians and Surgeons Dean’s Award for Distinguished Service, the Federation of American Societies for Experimental Biology Special Award for Science Advocacy, the Friends of the National Institute for Nursing Research Health Advocacy Award, the Awareness and Advocacy Award from the Clinical Research Forum, the Friends of the National Library of Medicine Paul G. Rogers Public Service Award, the National Advocacy Leadership Award from the Lupus Foundation of America, and the AcademyHealth Chair Award.

A native of Chicago, Woolley received a bachelor of science from Stanford University and a master of arts from San Francisco State University. In her early career, Woolley served as San Francisco project director for the then largest-ever NIH-funded clinical trial, the Multiple Risk Factor Intervention Trial (MRFIT). In 1981, she became administrator of the Medical Research Institute of San Francisco, and in 1986 was named the Institute’s executive director and CEO. Woolley has served as president and CEO of Research!America since 1990.