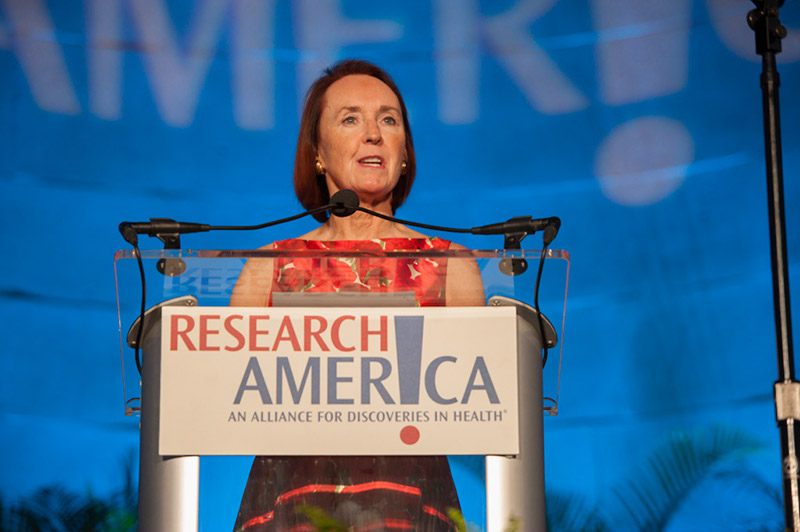 Last weekend’s March for Science truly was a celebration and a success. That so many passionate advocates participated — hundreds of thousands in cities across the globe (some in the pouring rain) — was awe-inspiring. Following the March, Research!America signed onto a community statement that gives voice to the importance of continued civic engagement by scientists and our commitment to fostering that engagement. At the D.C. March, we were thrilled to see two Research!America board members, APHA executive director, Dr. Georges Benjamin, and AAAS CEO and former Congressman, Dr. Rush Holt, among the speakers, and our video up on the jumbotrons. Some Research!America staff marched in D.C., while others participated at satellite marches in Oklahoma, California, and Utah. Read our summary of the March, see media coverage, and check out the Twitter activity.

On the Hill, it has been a week of ‘will they, or won’t they.’ It currently looks like they will… pass a week long Continuing Resolution (CR) rather than triggering a government shutdown, that is.  While there are still several outstanding items, we are hopeful that Congress will pass an omnibus appropriations bill before the new CR expires. OMB Director Mulvaney provided some promising news: the lack of dedicated wall funding in the omnibus spending package is not a deal-breaker for the President. We have not yet triggered the pro-omnibus sign-on letter I mentioned last week, since there is as yet no bill language to review. It may well be that by the time the bill becomes public, the die will be cast and a sign-on letter would be moot. Stay tuned…

While we expect the omnibus to provide a robust increase for NIH and at least modest increases for CDC and FDA, there has been radio silence on NSF and our best guess for AHRQ is a budget cut. This continuing assault on AHRQ funding is a costly mistake. With nearly $4 trillion spent on healthcare every year, doesn’t it make good fiscal sense to ensure we are getting the most bang for each health care buck? As Rep. Lucille Roybal-Allard (D-CA) compellingly argued in an op-ed in The Hill last week, the research AHRQ funds should be championed, not stifled. I know I’m preaching to the choir, but I am also asking you to help convince Congress to follow Congresswoman Roybal-Allard’s lead. Here’s an AHRQ factsheet and an editable email making the case for AHRQ funding. If you’d like to brainstorm other ways of making the case, count us in! Email me or Ellie.

On the topic of compelling advocacy, I hope you’ll take a minute to read this op-ed by the directors of Pennsylvania’s five NIH-designated Comprehensive Cancer Centers. They did a terrific job of coupling their arguments for robust NIH funding with rightful praise for the extraordinary level of bipartisan support NIH enjoys in Congress. Appreciating what our champions are up against is foundational to being effective in supporting their efforts.

Yesterday, the Senate HELP Committee voted largely along party lines (14-9) to confirm Dr. Scott Gottlieb for the role of FDA Commissioner, and his confirmation by the full Senate is all but assured. During the confirmation hearings, Dr. Gottlieb asserted that addressing the opioid epidemic should be a top priority for FDA. We recently had the opportunity to discuss the epidemic with prominent addiction researcher, Dr. Kathleen Brady, who serves as Vice President for Research at the Medical University of South Carolina. Read our interview with Dr. Brady, and check out our new fact sheets on the interrelated topics of Substance Use Disorder and Pain.

Last, but definitely not least, I hope you will use our streamlined portal to nominate an extraordinary individual (or several) for Research!America’s 2018 Advocacy Awards.