Looking Back at Accomplishments of the Past and Potential for the Future: Research!America’s 30th Annual Meeting of Members 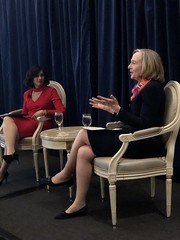 “The future will be the future you create,” said Susan Hockfield, PhD, President Emerita of MIT and Professor of Neuroscience at the Koch Institute for Integrative Cancer Research. She was joined by Seema Kumar of Johnson & Johnson in a “fireside chat” at the Research!America 30th Annual Meeting of Members, held March 13, 2019 at the Willard Hotel. The meeting included a look back at 30 years of research and innovation, and a thoughtful discussion of what the future could hold.

President and CEO Mary Woolley presented Research!America’s accomplishments during 2018 and a look at priorities for the coming year. “We want to grow federal funding across the spectrum of health-focused research and science writ large – we can’t leave out the rest of science,” she said, adding, “we’re going to be fighting for a policy climate where public and private enterprises have every chance to realize their goals.”

Admiral Brett P. Giroir, Assistant Secretary for Health at the Department for Health and Human Services (HHS) was a featured speaker and provided insights on many health challenges the United States has faced and continues to face. Life expectancy, he pointed out, steadily increased between 1900 and 2015, and “this didn’t happen by itself. It happened because of research. We got here because of research and the only way we’re going to move forward is to have a staunch commitment to research.” 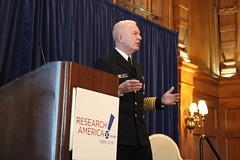 However, the U.S. faces many health challenges in the 21st century. Adm. Giroir provided overviews of actions to fight the opioid crisis. Last year, he said, 2.1 million people were addicted to opioids and 11.4 million misused opioids. “The main reason for opioid misuse is pain,” he said. “If we don’t solve the pain crisis in the United States with new approaches, new research from basic mechanisms and new targets, to how we deliver and implement, we will never solve the opioid crisis.”

He also discussed the tremendous progress made in treating HIV. “If we could reach everybody who has HIV and put them on therapy,” he suggested, “we could stop HIV tomorrow. Our goal is to translate that theoretical possibility into reality.”

Adm. Giroir’s remarks were followed by the fireside chat with Seema Kumar and Dr. Hockfield. Dr. Hockfield reflected on her tenure as President of MIT, and her thoughts on the developments of the past 30 years and what the next 30 years might hold. “One way to think about the future we’re going to be living in,” Dr. Hockfield said, “is to think about the future we’re living in today. The 21st century’s technology transformation story,” she continued, “is the convergence of biology with engineering.” She shared how MIT scientists are using viruses to build batteries, for example – research exploring cancer that may contribute to energy sustainability worldwide. Dr. Hockfield’s upcoming book, The Age of Living Machines: How Biology Will Build the Next Technology Revolution, published May 7, 2019, will explore this convergence.

Dr. Hockfield also described how she had the good fortune to work in an interdisciplinary lab to see “the magic of people coming together across disciplines” to solve challenging problems. By creating opportunities where people can gather together and bring perspectives from a number of different points of view, we can discover “the little jewel that holds the key for turning things around,” she said. 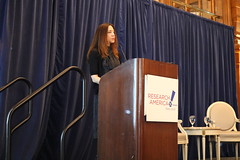 Melissa Shiffman, a cystic fibrosis patient, then addressed the group to discuss the importance of advocacy for health research. She shared her experience living with the disease and that although research helped her live a longer life, it was the Cystic Fibrosis Foundation that has given her the opportunity to become an advocate and find her voice. Her “first day on the Hill was a long emotional day,” she said, “and I was drained from sharing personal details about my life, but I never felt more energized and empowered.”

She also shared how important advocacy and research has been in advancing treatments for CF. “We proudly talk about cystic fibrosis being the best story in medicine,” she said. “Families who share a rare disease start grassroots fundraising and within decades we have an exciting drug pipeline attacking the disease from many angles, and within the next year we will have treatments that benefit 95% of people with CF.”

The final speaker at the Annual Meeting was Dr.  Gary Gibbons, the director of the National Heart, Lung, and Blood Institute at the National Institutes of Health. He focused on three key priorities of the NHLBI: health disparities in at-risk populations, new treatments for sickle cell, and clinical research for cystic fibrosis.

Heart disease, he said, is emblematic of the issue with health disparities. “We’re starting to identify high-risk communities,” adding, “in a lot of communities having negative outcomes in one sphere,” such as opioids, “also have it in another,” such as cardiovascular disease.

Funding research gives all of us a better chance of living a healthier life.
Pam Hirata, heart disease survivor